Posted About Three Months Ago

Rochester competed in the Small Schools (1A - 3A) Division of the Hoosier State Relays Indoor State Championships at Indiana University's Gladstein Fieldhouse  on Saturday. Five individuals and two relays competed for the Zebras.

RHS was led by throwers Kennedy Jackson and Marshall Fishback.  Jackson earned a state runner-up title in shot put with a personal best heave of 37' 11.75". Likewise, Fishback reached the podium with a fifth place finish.  He, too, threw a personal best, with a mark of 51' 7".

Two weeks ago at Indiana Wesleyan University, Jackson improved her personal best of 36' 1", set at last year's IHSAA Sectional at Bremen, by five inches.  Saturday, she bested that mark, 36' 6", by well over a foot.  Having graduated past the 37' threshold and nearly surpassing 38', she heads into the outdoor season intent on reaching more new milestones. 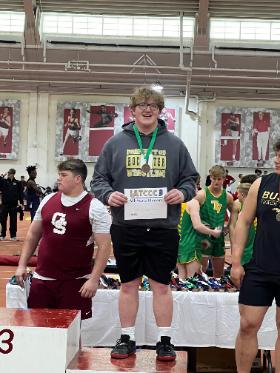 Fishback achieved some new milestones of his own.  For the first time Saturday, he crossed the 50' mark.  His previous personal best was 48' 7", thrown at last year's Three Rivers Conference Championships.  His 51' 7" throw was a huge step forward after having thrown just 47' 10.5" in indoor qualifying.  Most impressively, four of Fishback's six throws exceeded his 2021 PR.

Dustin Siebert competed in pole vault for RHS.  Coming off a personal best vault of 12' 0" at Purdue three weeks ago, Siebert wasn't able to regain his form after a long layoff.  He is likely to benefit from the regularity of the outdoor schedule, which kicks off against Plymouth on Friday, April 1.   Though his 10' 6" vault was short of his personal standard, it was still good for a 13th place tie.  The contest sets up an interesting competition between Siebert and Maconaquah's Cory Bockover, who also cleared 10' 6" Saturday, but placed beneath Siebert on attempts.

In the 3200, teammates Madilyn Calloway and Zoe Seward competed well.  Calloway placed ninth with a time of 11:55.61, a substantial improvement over her 12:09.78 seed time from Wesleyan two weeks ago and an indoor personal best.  Seward placed 11th with a time of 12:00.74, consistent with her 12:00.91 seed time established at Purdue three weeks ago.  Her time, too, was an indoor best.  For the first fourteen laps, Calloway and Seward ran within a stride or two of one another.  Calloway pulled away somewhat over the last two laps, but both finished strong.

The 4x200 team of Zach Pickens, Jarret Regan, Braxton Mencias, and Layne Backus placed 12th overall at 1:37.44. The team finished well considering they were seeded 16th with a seed time of 1:39.94, set two weeks ago at Wesleyan.  That race at IWU was the first 4x200 for the group, and the growth in their second try was evident.

There was a bit of drama in the race on the first turn of the third leg as Mencias, in lane one, took the banked curve on the high side of his lane and a runner from Franklin County attempted to pass on the inside.  Franklin County's trailing runner made contact with Mencias and fell violently over the bank, taking out two sections of railing in a hard fall.  Mencias kept his balance and carried on, handing off to Backus, who had to navigate the debris of the disconnected railing on the anchor lap.

The final competitors for RHS were the distance medley relay team of Araceli Ochoa, Kendyll Bradley, Elena Bode, and Madilyn Calloway. Like the boys 4x200 team, the girls DMR placed 12th, finishing above their 15th place seed.  Their time was 14:11.37, a nice improvement over their 14:42.37 seed time.   Bradley ran in place of Lucy Rangel who ran at the Indiana Wesleyan Qualifier but was unavailable Saturday.

Bode and Calloway have been stalwarts for RHS Track & Field for years, and now the team will be bolstered by the addition of Rangel, a freshman, and Ochoa and Bradley, a junior and a sophomore respectively; both were hampered by injuries last season, but enter the 2022 outdoor season in good health.  Along with Seward, the group will make a formidable distance corps for RHS.