Posted About One Year Ago by Shelby Lopez 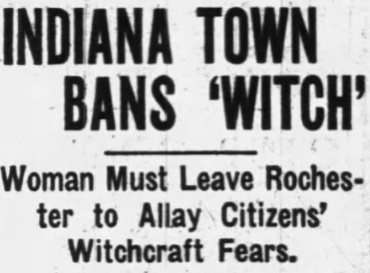 (Headline clip published in The Republic, Columbus, Indiana, May 12, 1932, accessed from Newspapers.com)

When Irene Ray moved her family to Rochester in 1932 the community was far from thrilled. Amid desperate times, after applying for relief and welfare support, her husband Charles, daughter Iloe and cat Fuzzy were placed in a large but shabby home on Audubon Ave.

As the Great Depression gripped the nation, most families in Fulton County were struggling too. Neighbors found great resentment in the outsiders collecting welfare from their county.

The family was well aware that they were not welcome by the other residents. The outcast’s reputation went from bad to worse over the next six years after multiple altercations with various townspeople. Multiple citizens soon started accusing Irene of witchcraft, blaming her for various misfortunes happening in the community.

After 25-year-old Georgia Knight Conrad suddenly became ill, gossip and murmurs turned into shouts and harassment for the Ray family.

The Knight family claimed Mrs. Ray caused their daughter to have leakage of the heart by stealing hair from her hairbrush, combining it with cat hair and vinegar, and burying it in a bottle for a spell. Rumors of her hexing methods ranged from voodoo dolls, spells, and consulting with a more powerful witch in Plymouth for deaths.

When Rochester’s Chief of Police Clay Sheets died suddenly of what appeared to be a heart attack, Irene was again blamed by the enraged townspeople. Chief Sheets had previously overseen the removal of Ray’s six-year-old granddaughter with charges of ‘morals of the household.’ Newspapers reported that Irene exploded in anger and accused Chief Sheets of being a tool of the Knight Woman, warning he would be sorry too.

Other accusations Mrs.Ray was blamed for included hexes that induced insomnia, nervous indigestion, floods, and fires.

A neighboring farmer claimed Irene had cursed his potato field after he confronted her about stopping her habit of using his property as a shortcut.

As the allegations against Mrs.Ray mounted, concerns were brought to States Attorney Murray McCarty who only laughed, as witchcraft was something that was not illegal or a chargeable offense in 1938 Indiana. Police began being pressured to arrest Irene regardless, threatening bodily harm to her if they did not take action.

There were eight alleged victims of hexes from Irene in Rochester by the time she was arrested on May 11, 1938, with charges of vagrancy. She was released the next day and her charges were dropped after promising the new Police Chief she would leave town.

Mrs.Ray denied all accusations, quoting a reporter for a newspaper out of Columbus, Indiana The Republic.  “If my accusers got right with God they won’t need to put such things on me, as I am living for the Lord and I intend to until I die. I won’t do the work of the devil because witchcraft is the handiwork of satan. I feel sorry for my accusers because they cannot think any other way.”

Irene,  often noted as a heavily black-haired woman, was rumored to have been Native American. Mrs. Ray would later claim she was unsure of having any Native American descent.

Irene and Charles moved to a house outside of town north of Lake Manitou. After the Rays left Rochester, Georgia Conrad’s mother claimed her daughter's condition immediately began to improve. Georgia died two years later from her condition.

Six months after being cast out of Rochester on November 4, 1938, Irene and her husband were hit by a car while walking on what is now St Rd 14. The driver May Kern of Athens, was on her way home from work and hit the couple as she tried to avoid a child on a bicycle.

Irene died at the scene and her husband was critically injured with a skull fracture. She was buried in Bremen. 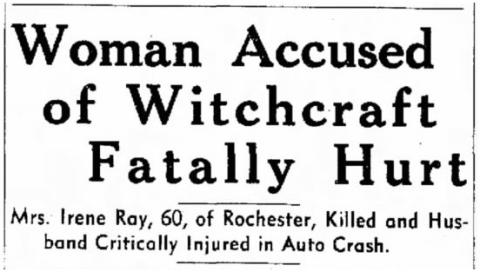 Locally, other than newspaper articles, little history remains of the outsider that was rejected from our town so long ago.

A newspaper clipping from Irene's death was published November 5, 1938, in Logansport's Pharos-Tribune and can also be accessed on newspapers.com.

Outside of Fulton County, the unusual story caught national attention from coast to coast, with out-of-state newspapers headlines and books about the ‘modern-day’ banished Witch from Rochester, Indiana, as the allegations continue to outlive her 83 years later.