The Indiana Department of Transportation announced the I-65 bridge over the Wabash River was renamed for a Purple Heart recipient. The renaming ceremony was held Wednesday in West Lafayette.

Indiana House Concurrent Resolution 6, which passed during the legislative session earlier this year urged INDOT to rename the bridge on I-65 over the Wabash River in honor of Captain Ronald D. Gutwein. 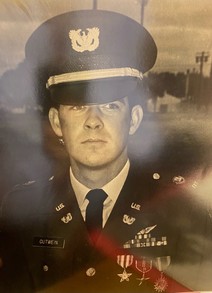 Captain Ronald D. Gutwein was born and raised in Francesville, in Pulaski County. The Vietnam War veteran served two tours in Vietnam. He risked his life to deliver essential troops and items for the successful completion of his unit's missions throughout the war and to evacuate soldiers from danger. He was awarded two Silver Stars, four Bronze Stars, two Army Commendation Medals, numerous air medals and was nominated for the Distinguished Service Medal, the second-highest decoration for the United States of America awards for heroism.

Captain Ronald D. Gutwein left the army but continued to serve in the Middle East as an aviation safety consultant to U.S. allies and also conducted flying medivac missions for the Mayo Clinic in Minnesota until his untimely death.